Some Cloud Services Look Stormier Than Others

Amazon Web Services (AWS) has been one of the most successful outposts of the vast Amazon empire. AWS is the global leader in cloud services and has grown at an incredible pace. This week, however, amidst increasing competition and a slowing tech economy, rumors of an AWS hiring freeze have surfaced in major media outlets.

AWS is a large profit center of Amazon.  Due to its profitability and growth trajectory, some may even view AWS as the primary business of Amazon, with the retail business as secondary.  If AWS is succumbing to gravity, other big tech companies could be taking cloud market share.  Or, perhaps, slowing at AWS could be a sign that cloud is starting to pull back. And for the broad economy, AWS is of such significance that a slowdown there could be indicative of a larger pullback to come.

Job listings offer a unique insight into how serious the current freeze is; if it’s only a small amount of roles or something larger that could significantly affect Amazon’s operating performance.

If you are not one who follows job listings regularly, it’s worth painting a picture of the current landscape. Listings have been down this year, but the tech sector has led the decline. This shouldn’t come as a massive surprise; as interest rates increased, companies’ appetites to continue projects and take on new ones shrank. Tech companies banking on growth far into the future are long duration assets and much more sensitive to interest rates than mature companies that pay dividends from current cash-flows. 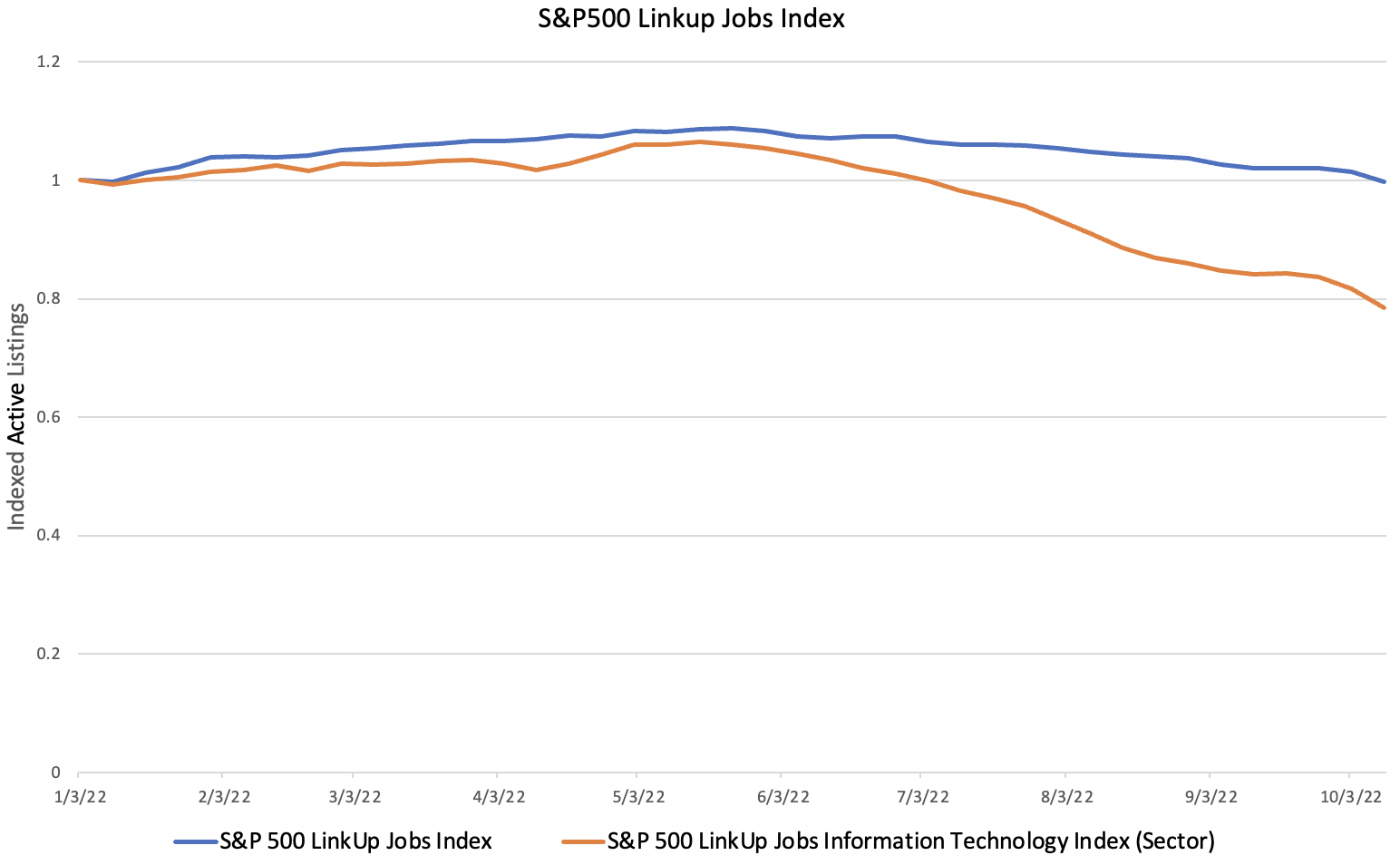 Given the whole sector is down, it’s not surprising that the three biggest cloud players have also seen their recruiting fall drastically over the past six months. It’s worth noting that prior to this, tech had been on a job listings run, so the sector did certainly have room to fall, just like Microsoft, Google, and Amazon.

We can see that the three biggest cloud players have all drawn down their recruiting drastically over the past six months or so. At this point nothing out of the ordinary looks to be going on with AWS, but all three of these providers are massive businesses with multiple facets to them. Going off total listings alone as a proxy for their cloud business would be like saying GDP is down for the US, so Amazon’s sales must also be down. While this could be true, it’s too broad of a statement to be useful.

Fortunately, job listings allow us to dive one step deeper, using the descriptions and titles that employers create for each listing we can search for keywords that relate specifically to AWS, as well as Google Cloud Platform (GCP) and Microsoft Azure. This will create a window into what the specific hiring for these divisions looks like in each company. 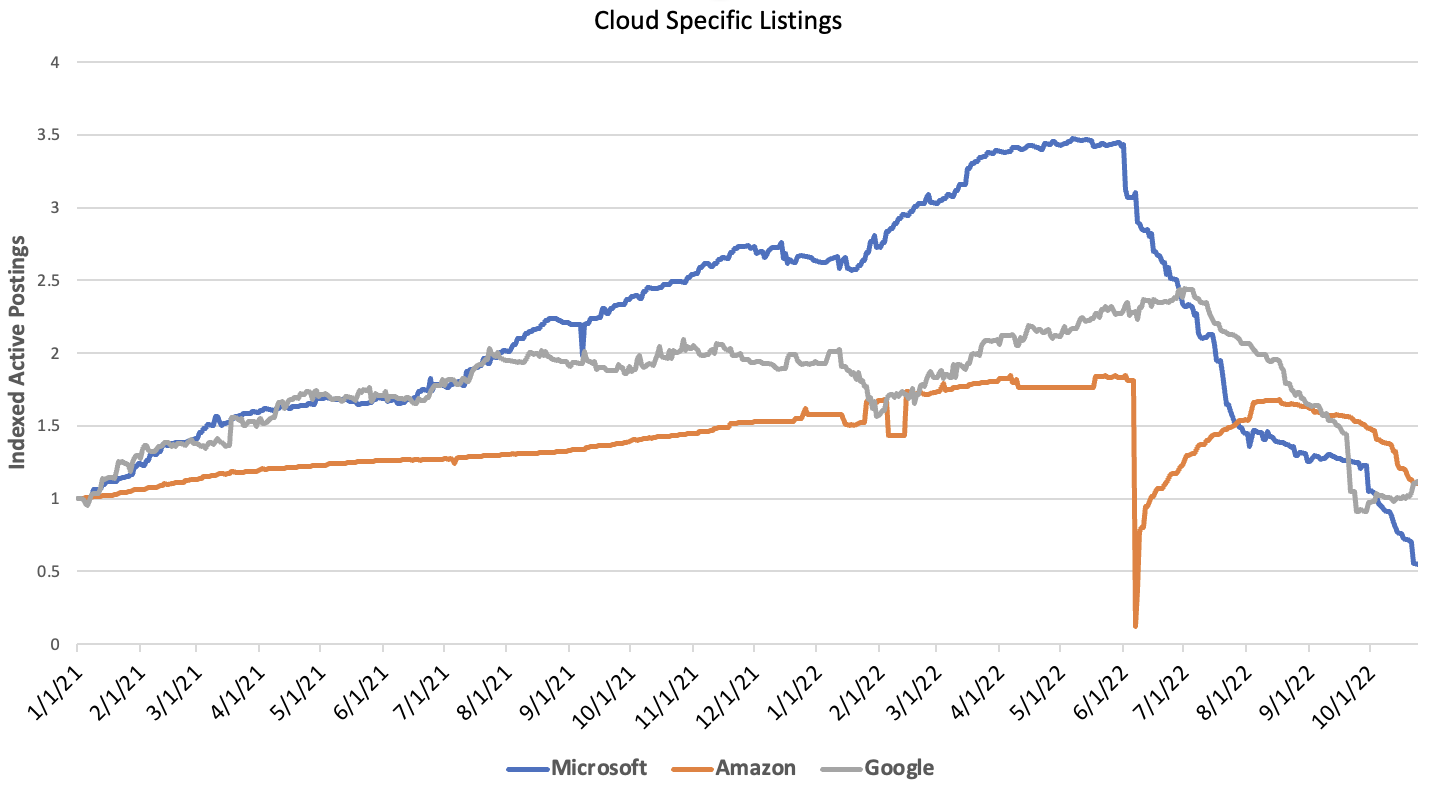 Through this window things start to become more interesting. Amazon’s cloud hiring has seen a drawdown, but not nearly as drastic as that of Google, or Microsoft. Google saw a large trimming of listings but appears to have refocused its priorities and is starting to add roles again. Microsoft is in more or less of a freefall, drastically trimming hiring plans with no signs of slowing down. Again, it should be noted that Microsoft did grow the fastest, so they had room to fall, but are now well below their listing rates seen in Q1 2021. Lastly, that brings us to Amazon, which is certainly trimming roles, but not at nearly as high of rates as its competitors. It also appears that AWS had a much more stable growth pattern compared to its peers, likely due to its cloud business being more developed compared to its peers.

This gives us good insights into how these specific companies are handling internal hiring, but we can also use the opposite side of the equation to get a proxy for cloud service demand. To do this we will search all of Linkup’s listings for keywords related to each cloud service, only excluding the providers’ listings themselves. This will effectively tell us if businesses are still demanding talent with specific experience with cloud services at similar rates and creating listings related to those services. 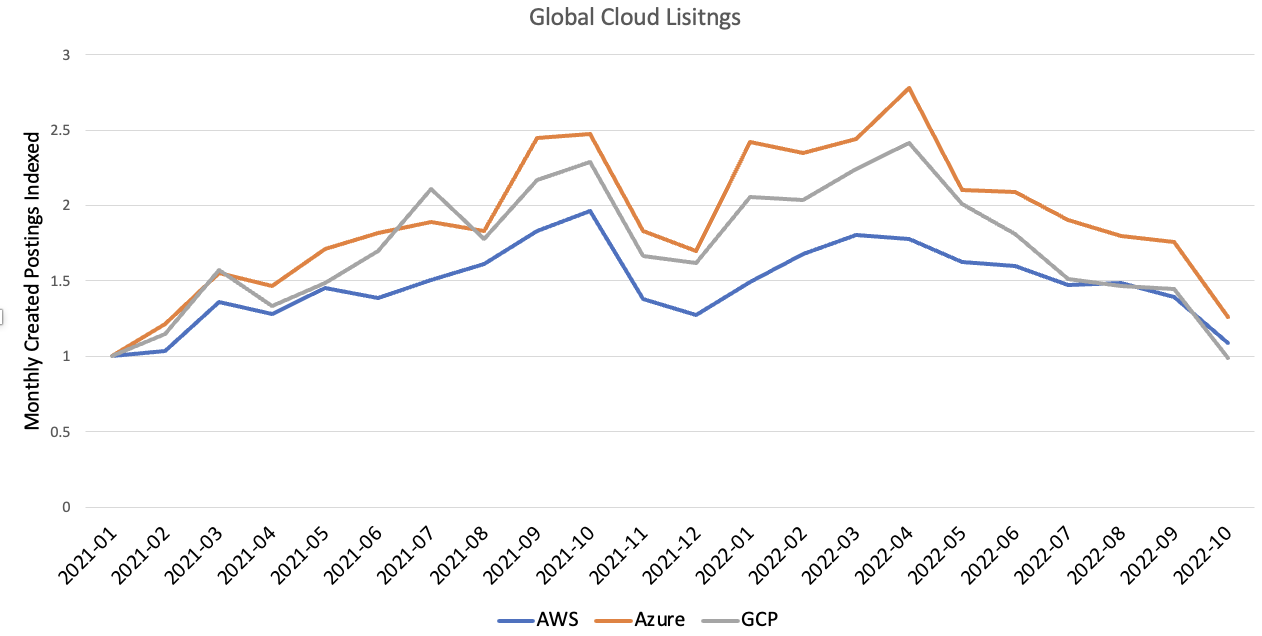 Here the story appears to be one of moderating demand. Amazon appears to have been more efficient with their hiring when compared to their peers with less volatility in job listings. We see that demand for GCP and Azure had increased at a faster rate than for AWS skills, but they also increased their listings at a much faster rate, as well. Leading us to believe that Amazon was more disciplined/efficient in their hiring.

This leads to a few main takeaways.  First, it does appear that cloud demand is moderating, and due to that, hiring initiatives are contracting for the three biggest companies in the market. Second whatever the impacts are to Amazon’s cloud business, there will likely be larger impacts on GCP and Azure as their hiring initiatives have grown and contracted faster in recent quarters.  Third, while the growth rate in cloud services is slowing, AWS appears to be better positioned to handle this slowdown compared to its peers.  The market leadership position of AWS has given it a larger and more stable base to build on and its talent recruiting efforts have been more stable.